Take a glimpse into the near future, and you’ll see plenty of options for wireless connectivity between devices. 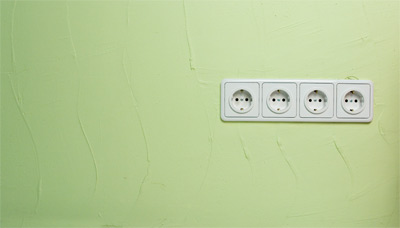 At the Consumer Electronic Show this year Sony was showing off a system to move large files, say from a video camera, to a computer or TV. Their system, called Transfer Jet only works when the devices are in close proximity to each other, but it’ll be a great feature, and moves data faster then a traditional USB cable.

Bluetooth, the short-range wireless technology that’s used in those Star Trek like cell phone headsets is becoming quite common – and celebrates its 10th year this year.

Connecting to the internet over a wireless hub has become commonplace now, and there are a number of city wide projects that will blanket an entire population inside a wireless mesh, meaning you can crack open your laptop and check mail almost anywhere.

But there’s a catch, and a big one.

Power. Lots and lots of power. At most blogging conferences now, the biggest tech issue is how many places can people plug-in to recharge their laptops, cell phones, iPods and digital cameras.

Network operation centres, those big data hubs where network servers sit on high speed fibre optic connections to the internet face huge power challenges. Recent outages among major players in San Francisco recently were due to power problems, nothing to do with network connectivity. A peak under your own desk will show you why – with each specialized device comes a power requirement of some kind – either a battery charger or an AC adapter to power the unit. I actually have far fewer cables connecting my computer equipment now, but more AC power cables.

Are things going to get better any time soon. Probably not. There are some promising technologies out there that might lengthen the battery life in your cell phone or laptop, but almost all of them lead to a power plug for charging.

So, while the idea of a wireless mesh covering the city, maybe even the globe is exciting, a bigger breakthrough be solving boring old AC electricity needs.