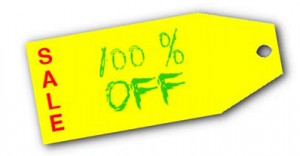 For years artists and industry observers have been suggesting that the only way the music industry as we know it will survive is to completely reinvent itself.

To date, reinvention hasn’t seemed particularly high on the list for major record labels. Mostly they’ve blamed their problems on their customers – chasing down peer-to-peer music sharers and sending teams of lawyers after music fans.

A report from this year’s MIDEM conference indicates there may be some changes coming. MIDEM is the industry’s largest and most influential trade show – and while it doesn’t get the kind of media attention it used to get in the pre-Consumer Electronics Show era – it’s the place where the most powerful people in the music industry gather to cook deals over cigars and cocktails.

As The Guardian reports, this year’s show is buzzing with the idea of saving the music industry by giving music away…

Now a host of new services, with the backing of major labels, are promising to revolutionize how music is distributed by offering millions of tracks, from much-hyped wannabes to established acts such as U2, for nothing.

Competing for attention at the Midem trade show, the services promise a global jukebox, paying for the free music by attracting advertising. Meanwhile, some acts are queuing up to swap their deals with labels for agreements with big advertisers which would further blur the line between bands and brands.

The move into a free service is a sea change for an industry which spent years fighting through the courts with companies offering free internet downloading and sharing of songs. full story here

This idea isn’t exactly new – almost all of us are using free services on the internet that are funded by advertising in one form or another. But go back a few decades and you’ll fine one of the most successful examples of this model – one that endures today.

Not only do record companies let radio stations use their music for free, they have entire teams dedicated to ‘serving’ those radio stations with the latest releases, arranging interviews with their artists, and often offering every type of legal incentive they can think of.

I personally know quite a few people who have massive music collections in their homes, provided gratis to them by the record industry, all in hopes of those same people playing their songs on the radio. These same people have been wined and dined for years, given free tickets to concerts, and flooded with music industry merchandise. I also know many people, recipients of these freebies, who augmented their incomes by selling the stuff to used record stores and other collectors. Short of exchanging harsh words, the record companies did nothing to stop this kind of activity.

By giving radio stations music for free, the music industry gains huge benefits. Their music gets ‘distributed’ over the air, people hear it, want it, and buy CD’s, concert tickets and go to live shows because of it.

What’s worked in one industry for the last 50 years will certainly work in this new industry, assuming the record companies adjust their business model to match what’s possible in this technology era. They’ve been actively fighting it for over ten years – and we all know what that’s accomplished. Now it’s time to get with the program – be brave and creative in doing their jobs – so they can reap the benefits for the next 50 years.

And if they need some help doing it, just give me a call.